"Her basic move set is the same as Peach's, but this princess has her own unique personality. She's known for being upbeat, energetic, and a bit of a tomboy."

Super Smash Bros. Ultimate is the sixth and latest installment of the Super Smash Bros. series. The game was first released on December 7, 2018. Ultimate features all 65 playable characters from the five previous games along with a multitude of newcomers.

One of those newcomers happened to be Princess Daisy, making her playable debut in the Super Smash Bros. series, being announced during E3 of 2018 alongside Inkling and Ridley. Daisy is an Echo Fighter of Princess Peach, meaning she has the exact same moveset as Peach but with a few aesthetical differences. Daisy shares her character number with Peach, but has an epsilon next to her number, representing the fact she is an Echo Fighter. Thus, Daisy is classified as #13ε.

On June 12, The Electronic Entertainment Expo of 2018 (abbreviated to E3 2018) first took place. This event showcases upcoming products in the video game company. A Nintendo Direct, which showcased Nintendo’s upcoming games, began at 9:00am. The panel for Super Smash Bros. Ultimate took up 25 minutes of said direct.

In this Direct, a new character concept was introduced; Echo Fighters. Demonstrated with Lucina and Dark Pit (Echo Fighters who made their debuts in the previous two installments), it was explained that Echo Fighters are characters that have identical movesets to another. Echo Fighters share their number with their base character and have an epsilon next to said number.

Daisy is revealed in this section as a new Echo Fighter to Princess Peach, showcasing her unique personality and animations along with her moveset. Daisy is the third newcomer announced for Super Smash Bros. Ultimate, following Inkling and Ridley.

Daisy's "Challenger Approaching" Screen. You will see this screen before fighting Daisy in the first two examples.

You'll see this screen before fighting Daisy in "World of Light".

Daisy is one of the several unlockable characters featured in this game. To unlock her, you must duel against Daisy and win. With one exception, Daisy is always fought for playability on Figure 8-Circuit, likely as a reference to the characters frequent appearance in competitive games such as Mario Kart. Here are the three ways Daisy can be unlocked: 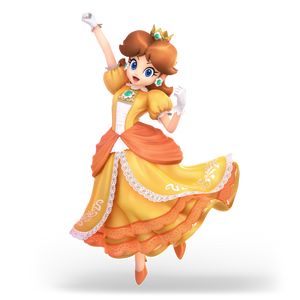 Daisy's dress in Super Smash Bros. Ultimate is the most complex costume she's received yet. It's essentially an intricate redesign of her modern dress; her orange panniers, turquoise brooch, gold crown and collar remain intact. Key additions to this gown are white frills that split down her legs, a silk front that reaches her flower-shaped brooch and white little flourishes on the sides of her dress and around her brooch. Daisy's gloves and collar have subtle flower motifs and there are golden designs on her crown. In comparison to Peach, Daisy's dress is a lot less sophisticated. While Peach has long gold flourishes and frills with decorative designs, Daisy has short and white flourishes along with very consistent designs for her frills.

Daisy's official artwork, used throughout the game, features Daisy jumping with her left arm up and her right hand in a fist, wearing one of her signature bright smiles.

Daisy's only major gameplay difference from Peach was having different knockback values from Peach when using turnips from the Vegetable move. This difference was removed in an update, rendering Daisy identical to Peach.

Role in World of Light

World of Light is the Adventure Mode of Super Smash Bros Ultimate. The plot of this mode is that a mysterious entity known as Gallem vaporized almost every fighter in the game and turns them into puppet fighters, enemies with the same moveset as their genuine version but possessed with a spirit that gives them new and special abilities. The sole survivor of this onslaught is Kirby, who lands on a new planet that he must navigate in order to free fighters.

Although she doesn't make an appearance is the opening movie, Daisy is one of the many fighters to fall at the hands of Gallem, and as such is one of the characters your team must collect. Daisy is the puppet fighter for a few spirits, but you cannot unlock Daisy until the second act of the game, when Gallem is defeated and the world is immediately taken over by another entity, Dharkon.

Daisy is located in the northwest area of Dracula's Castle, which can be accessed after destroying the ghost guarding her with a cannon. This can only be done if you are equipped with the Dry Bones Bowser spirit. After battling and winning against Daisy, she will be freed and join your party.

Classic Mode is a mode in which the player chooses a character and goes through a predetermined route of fights based around a theme (Ex. Sheik's Classic Mode Masquerade has Sheik facing off against fighters whose faces are concealed, Little Mac's Classic Mode Friendly Sparring consists of Little Mac fighting against close combat fighters, etc.). At the end of each Classic Mode, the player is awarded with a unique artwork known as a congratulation screen of their chosen character.

Daisy's Classic Mode is entitled Sarasaland Represent! In her Classic Mode, Daisy fights against her fellow princesses. Daisy's congratulation screen features her, alongside Mario, Peach, and Luigi (from left to right) making taunt poses on the 3D Land stage.

Spirits are collectable power-ups in Ultimate that serve as a replacement to trophies from the previous installments.

In Ultimate, spirits are the disembodied forms of characters that have been separated from their physical bodies and then put into Puppet Fighters by Gallem, one of the main antagonists of story mode. Puppet Fighters are duplicates of existing characters with the same moveset as them but with additional power-ups and strengths. In order to capture a spirit, you must battle and win against the Puppet Fighter it is possessing or buy it from Funky Kong's Shack.

There are four types of spirits: Primary Spirits enhance a fighter's Attacking, Shielding, and Grabbing stat; Support Spirits give a fighter a unique skill; Fighter Spirits are the spirits of playable fighters and cannot be used in battle once obtained; Master Spirits are spirits that run facilities to strengthen spirits. They cannot be used in battle once obtained. The Spirit Classes for Primary and Support spirits from weakest to strongest are Novice, Advanced, Ace, and Legend.

* = These spirits are not obtained by battling a Puppet Fighter of Daisy.