Princess Daisy makes her debut in the Super Smash Bros. series in this game. Daisy is not playable and does not make a physical appearance, instead having an unlockable trophy and having a reference in the form of one of Princess Peach's alts. 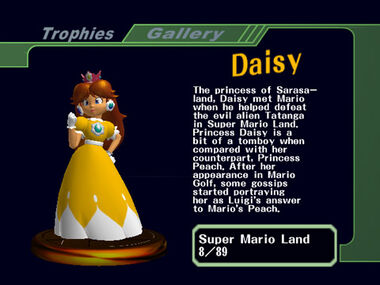 There is a total of 293 trophies featured in this game, depicting various characters and items. Princess Daisy is one of the Nintendo characters who received a trophy, being No. 8 in the Super Mario Land set and No. 206 overall. Daisy's trophy depicts her in her classic dress, seen in Super Mario Land and Mario Party 3. Her trophy has the following description:

The princess of Sarasaland, Daisy met Mario when he helped defeat the evil alien Tatanga in Super Mario Land. Daisy is a bit of a tomboy when compared with her counterpart Princess Peach. After her appearances in Mario Golf, some gossips started portraying her as Luigi's answer to Mario's Peach. 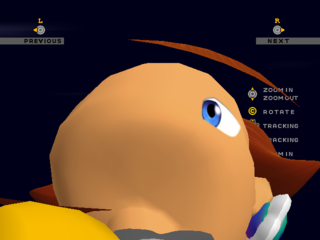 Something particularly unique and memorable about Daisy's trophy in this game is that rotating the camera behind Daisy's hair when looking at her will reveal a third eye that looks vastly different from her two normal eyes. While this bug can be seen in Japanese and early American versions of the game, this bug was fixed in North American "Player's Choice" editions of the game. 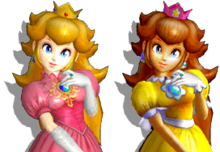 Princess Peach makes her Smash Bros. debut in Melee, although unlike Daisy, she is a playable character. Peach's first alternate costume is heavily inspired by the Sarasaland Princess. This alt is the most divergent of her four alts, as whilst the other three and her default costume consist of a corset with flame designs surrounding her brooch, a small waistband, shoulder-length gloves, and both designs and silk extensions at the end of her dress, Her Daisy-inspired consists of a simple yellow gown with white dollop designs on the ends, a bigger brooch surrounded by flower-designs as opposed to flames, wrist-length gloves with flowerlike ends, a larger waistband, flowery openings to her dress sleeves, and a tanner shade of both skin and hair. 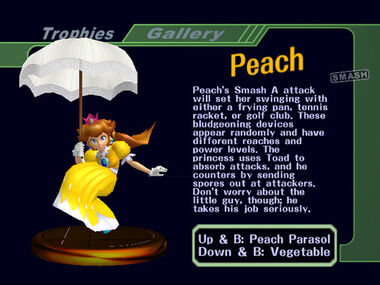 This alternate costume is used for a trophy featuring Peach demonstrating the move Peach Parasol. Although the description has nothing to do with Daisy, it reads as follows:

Peach's Smash A attack will set her swinging with either a frying pan, tennis racket, or golf club. These bludgeoning devices appear randomly and have different reaches and power levels. The princess uses Toad to absorb attacks, and he counters by sending spores out at attackers. Don't worry about the little guy, though; he takes his job seriously.