Princess Daisy is once again not playable in this installment of the series but is heavily referenced to throughout the game.

Once again, Princess Peach is playable and has an alternate costume inspired by Princess Daisy. This time, the color scheme of the alt is updated to be based on Daisy's redesign from Mario Party 4. However, unlike in Melee, the alt doesn't have any significant differences from Peach's default dress in terms of model, instead simply being a recolor.

Unlike in her previous trophy, Daisy doesn't wear a yellow dress in her trophy. Instead, Daisy wears her athletic gear from Mario Strikers Charged. Daisy's trophy is thus given the apt title of Strikers Daisy. This trophy is No. 47 of the 544 featured in Super Smash Bros. Brawl. It is proceeded by a trophy of Mario in his Charged get-up. 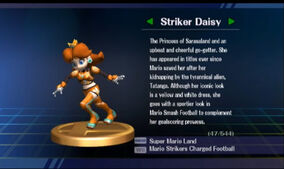 Strikers Daisy: The Princess of Sarasaland and an upbeat and cheerful go-getter. She has appeared in titles ever since Mario saved her from the tyrannical alien, Tatanga. Although her iconic look is a yellow and white dress, she goes with a sportier look in Mario Smash Football to complement her goalscoring prowess.

Stickers are exclusive to Brawl. They are collectable items that can be used during the Adventure Mode, Subspace Emissary, to strengthen a character in one way or another. Daisy is featured in two stickers, both of them which provide offensive advantages. Her artwork in her two stickers are taken from Super Mario Strikers and Mario Party 7.