"The ruler of Sarasaland loves the thrill of the chase. Daisy plays to win!"

Super Mario Party was made with the intention of taking the Mario Party series back to its roots, breaking away from the one-vehicle function introduced in Mario Party 9 and returning to the "four people on one map" gameplay of previous games. It adds updates to this gameplay style as well, featuring the ally function of Mario Party: Star Rush and being the first Mario Party to have online play.

This game marks Princess Daisy's thirteenth playable appearance in the Mario Party series, and is one of the sixteen starting characters on the roster.

Daisy appears on the cover art of the game, dancing alongside Shy Guy, Waluigi, and Bowser Jr, standing in a pose that implies the four characters are representing the Sound Stage mode in this game.

Looking to travel 3, maybe 4 spaces? This die is for you!

Super Mario Party takes a page from Star Rush's Toad Scramble and gives each character, in addition to the standard 16 die, a unique dice block with its own set of strengths and weaknesses. Each die has six options. Some dice blocks can give you coins (i.e. Rosalina), lose coins (i.e. Wario), stay in place (i.e. Donkey Kong), and more. 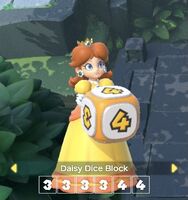 Daisy holding her unique dice block, with the possible outcomes listed below.

Daisy holding up her dice block after choosing it.

Daisy dancing with Shy Guy, Waluigi, and Bowser Jr. on the cover.

Daisy on the cover art.