Unlike most of the games in the Mario series at that time, Super Mario Land does not take place in the Mushroom Kingdom and uses line art. Mario travels to a whole new location in this game; Sarasaland. This game marks the debut of Princess Daisy, benevolent ruler of Sarasaland and the lead damsel-in-distress.

Once upon a time, there was a peaceful world called Sarasaland. In this world there were 4 kingdoms named Birabuto, Muda, Easton and Chai. One day, the skies of Sarasaland were suddenly covered by a huge black cloud. From a crack in this cloud, the unknown space monster Tatanga emerged to try to conquer Sarasaland. Tatanga hypnotized the people of all the kingdoms so that he could control them in any way he liked. In this way he took over Sarasaland. Now, he wants to marry Princess Daisy of Sarasaland and make her his queen. Mario came to know of these events, and he has started on a journey to the Chai Kingdom where Princess Daisy is held captive, in order to restore peace to Sarasaland. Can Mario defeat Tatanga, release people from his interstellar hypnosis, and rescue Princess Daisy? It's all up to you and Mario's skill. Go for it Mario!

The plot of Super Mario Land is that the enigmatic alien Tatanga invades the kingdom of Sarasaland, hypnotized the kingdom's denizens and kidnapped Princess Daisy, one of the kingdom's rulers. Mario receives the news and travels to Sarasaland to rescue the princess from captivity in the Chai Kingdom. Mario must go through the other three kingdoms - Birabuto, Muda, and Easton - defend himself against the hypnotized enemies of each kingdom, and rescue Princess Daisy. Each kingdom is led by a boss, King Totomesu, Dragonzamasu, Hiyoihoi and Biokinton respectively. At the end of the first three levels, Mario will meet who he believes to be Princess Daisy, but in reality is an imposter. The enemy will reveal itself as such and then and leave. In the climax, Mario must face off against Tatanga - who uses his battle robot Pagosu - in the Sky Pop. Once Tatanga is defeated, Mario rescues Daisy, who gives him a kiss. The two fly away together and the credits roll.

There is a total of 34 enemies featured in this game. Many of them are based on pre-existing Mario enemies such as Goombas and Lakitu, often functioning in similar ways as well. Jumping on an enemy will defeat them. In each kingdom, there is a designated boss. For Birabuto, it is King Totomesu. For Muda, it is Dragonzamasu. For Easton, it is Hiyoihoi. For Chai, Biokinton must be defeated in order for Mario to fight Tatanga. 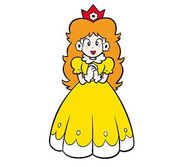 Official art for the game

Mario rescues Daisy at the end of the game and earns a kiss.