NES Open Tournament Golf is a 1991 Nintendo sports game initially released on the Nintendo Entertainment System. The game was developed by Nintendo Research & Development 2 and one of the very first golfing game in the Mario series.

Daisy makes her second appearance in this game. She's a nonplayable character who served as Luigi's caddy, with Peach serving as Mario's. The two will occasionally appear comment on their assigned golfer's method of playing. On the Title Screen of this game, Daisy is depicted with blonde hair and a blue miniskirt due to color limitations of the NES.

Daisy's official artwork for the game.

Daisy standing behind Luigi in artwork. 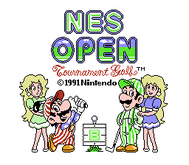 The Title Screen of "NES Open Tournament Golf"; Daisy is given blonde hair and a blue dress.
Community content is available under CC-BY-SA unless otherwise noted.
Advertisement