"Don't judge this book by her flowery cover, Daisy possesses superior technique and can nimbly face off against the fiercest powerhouse."

Mario Tennis is the first official installment in the Mario Tennis series, first released on the Nintendo 64 in 2000.

This game is incredibly important to the character of Princess Daisy, as it marks her reintroduction to the Mario series and her first playable appearance. This is also Daisy's first time being voiced, with Kate Fleming providing her voice for the first and last time.

Daisy is categorized as a Technique character along with Princess Peach, Toad, Waluigi and Shy Guy, and is considered the most powerful technique character in the game. She doesn't often miss when she's close to the net and her playing style is very swift.

In Doubles Tournament, all characters have a designated CPU character to play alongside the chosen character. Daisy's designated partner is Birdo, who also makes her reintroduction in this game. Daisy is Luigi's designated doubles partner.

Mario Tennis is the first game to showcase Daisy's personality through actions, animations, and voice clips, though it's vastly different from her current one. Daisy's voice is very gentle and serene, actually sounding less energetic than Peach's. Daisy is characterized as graceful but cheerful and endearingly clumsy. After winning a game, Daisy throws her racket up in the air, but it goes further back than she expected, forcing her to run and catch it. During Daisy's celebration of winning a tournament, she gets so caught up in her excitement and gratefulness that she falls off the stage and blushes.

Daisy has an alternate costume in this game, a light purple dress with dark purple accents. 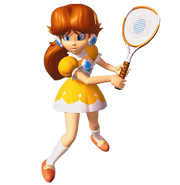 One of Daisy's promotional images for Mario Tennis. 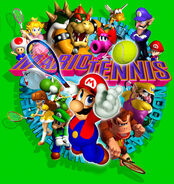