"Welcome Alex. You sure are an aggressive player."

Mario Tennis is the second official installment of the Mario Tennis series, originally released on the Game Boy Color in 2000.

Princess Daisy makes her second appearance in the Mario Tennis series in this game. However, she is not playable and is only featured as a supporting character in "Exhibition Mode". Her character sprite is heavily pixilated and she shares her color scheme with Peach, Bowser, and Wario. Her hairstyle is less pointed than Peach, just as in other games. Her hair and clothes are orange while her skin is beige. Daisy's icon for the Mario Tennis (N64) character showcase (pictured in the gallery below) instead depicts her with fuchsia hair and earrings.

In "Exhibition Mode", she first appears in the throne room of Peach's castle with Peach, Mario, Luigi, Baby Mario, Yoshi, Donkey Kong, Toad, Waluigi, Boo, Bowser, and Wario to congratulate the player and invite them to "Mario World". If the player goes to talk with Daisy, she welcomes them magnanimously and compliments their tennis skills. Though Daisy does not receive much characterization in this game, she is portrayed as close friends with Peach. She stand to the left of Peach's throne, with Mario on the right side, signifying that the two are her most trusted companions. During the match at the Castle Court, Daisy is once again standing to the left of Peach watching the match with her.

Daisy stands next to Peach, who is officiating the match at Castle Court. 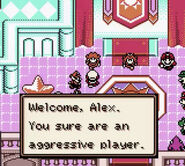 The characters of the Nintendo 64 version of Mario Tennis as depicted in the Game Boy Color version. Daisy is third character on the bottom row.