"An energetic princess who is particularly fond of her flower earrings."

Mario Party Superstars was announced during Nintendo's E3 of 2021 but Daisy was not seen in any promotional clips or videos until the Nintendo Direct of September 23, 2021, when she was shown in a group shot with the other playable characters.

This game marks Daisy's fourteenth appearance in the Mario Party series. She is one of the ten playable characters in this game. 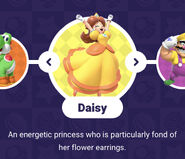