Mario Party 7 is the seventh installment of the main Mario Party series, first released in November of 2005.

The gimmick of this game is that Toadsworth has invites the playable cast of this game on a luxury cruise around the word. However, upon the cast's arrival to their first stop, they find that Bowser has turned the relaxing location spot into a chaotic party.

Daisy makes her sixth appearance in the Mario Party series here and is one of the twelve playable characters featured in the game.

A major component of this game is teamwork and pairs. Interestingly, however, tag team names from Mario Party 5 and Mario Party 6 are not included in this game. Instead, teams are given one of the following marine-inspired team names: dolphin, seagull, tuna, and mollusk.

Each playable character has a default partner and those two characters share an orb. Like in Mario Kart: Double Dash!!, Daisy's default partner is Princess Peach. The shared orb between the two is the Flower Orb. This orb's function is explained in its description:

Spaces ahead of you will change to flower spaces, letting you ignore traps. You get 3 coins for every space you move. 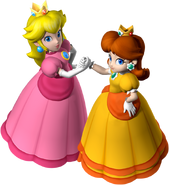 Daisy and Peach's artwork on the cover of this game.
Community content is available under CC-BY-SA unless otherwise noted.
Advertisement