"When it comes to beauty, there's no denying Daisy is fairest of all! There's no need to battle."

Mario Party 3 is the third installment of Mario Party series, first released on the Nintendo 64 in December of 2007.

This game marks Princess Daisy's introduction to the Mario Party series and her second playable appearance. She's playable in Party Mode and Mini-Game Mode but is not playable in Story Mode, appearing as a designated opponent for the player. Her partner is Snifit and her favorite item is the Cellular Shopper.

In comparison to her last playable appearance in Mario Tennis (N64), Daisy is portrayed in a completely opposite fashion, and more in line with her current personality. Where she is demure and clumsy in Mario Tennis, she's arrogant and imperious in Mario Party 3. She's not above using her beauty to manipulate others or throwing tantrums when things don't go her way. Though Daisy is described as a tomboy in two of her bios, she is portrayed rather femininely, putting a lot of value in her appearance and representing the Beauty Star Stamp. One of the most infamous moments in this game and in Daisy's entire history is when the small Princess Daisy slapped the mighty Bowser into the sky with one slap.

The plot of Mario Party 3's Story Mode is that the single player must compete against others in order to become the Super Star. The single player must collect fill their stamp card with the seven Star Stamps; Wit, Kindness, Strength, Love, Courage, Beauty, and Mischief. Daisy is a designated opponent who must be battled in order to gain the Beauty Star Stamp. The stage Daisy must be battled on is Backtrack.

Once the Millennium Star announces to the player that the next star they must earn is the Beauty Star, Princess Daisy immediately opens the doors of Princess Peach's Castle and strikes a pose. She runs towards the group - consisting of the player, Millennium Star, and Tumble - and says she deserves the Beauty Stamp. Once Millennium Star tells Daisy that she must earn the star, she flirts with him and nearly gets the stamp until the player tells him "But that's not fair!" The Player and Daisy must duel on the Backtrack board to earn the Beauty Star. As they get ready for the game, Bowser appears, and everyone but Daisy notices. Bowser jumps and roars behind Daisy. This startles the princess and she slaps him into the sky. The group is bewildered and Daisy simply responds "What? He was in my way!" The game will then begin.

Upon losing the game, Daisy falls to the floor and bursts into tears, noting that she's never lost before, not even to her father. She then runs off in despair and the player receives the Beauty Stamp.

Daisy is seen during the end credits of the game, gracefully seated on the right end of the Chief Programmers billboard and looking side to side. The final screen showcases all the Mario characters relaxing outside Peach's Castle. Daisy sits on the grass with her hands clasped, watching a butterfly fly around her. 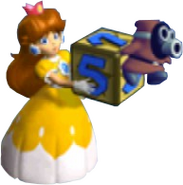 Princess Daisy and her partner, Snifit.

The playable cast of Mario Party 3.