Princess Daisy is one of the five characters playable in the 11 virtual minigames, the other four characters being Mario, Yoshi, Wario, and Waluigi. 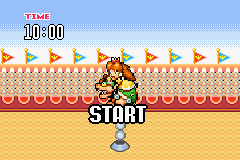 The only minigame Daisy is playable in is Daisy's Rodeo! and can be played once the Daisy card is swiped. In this minigame, Daisy is riding on a mechanical bull designed similarly to Bowser. In order to win, Daisy must stay on the bull for a full 10 seconds. The player must press one of three buttons when indicated. Pressing L swings Daisy left, pressing R swings Daisy right, and pressing B swings Daisy up. If Daisy misses three indicated presses, she'll spin off the bull and the player will have lost. 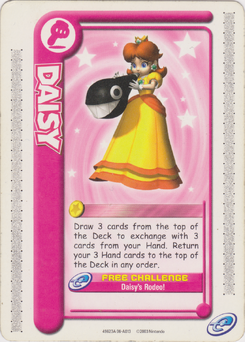 Swiping the Daisy's Rodeo! card on the Nintendo e-Reader will allow this game to be played. The card features Daisy's official artwork in Mario Party 4. The description of this card is: