Mario Golf: Toadstool Tour is the third installment of the Mario Golf series, initially released in 2003 on the Nintendo GameCube.

Mario Golf: Toadstool Tour is Daisy’s first playable appearance in the Mario Golf series. She is one of the twelve starting characters on the roster. Daisy also debuts her modern sportswear in this game, a yellow tank top and orange shorts with yellow pockets. Additionally, this is the first time Daisy is voiced by Deanna Mustard. After being provided a gentle and regal-sounding voice by her previous two voice actresses, Kate Fleming and Jen Taylor respectively, Mustard gives Daisy more spunkiness and a proclivity to slang terms.

Daisy is featured sporadically in Toadstool Tour’s opening cutscene. At the beginning of the movie, Mario and Luigi are shown admiring a trophy and looking at their reflections in it. From offscreen, Peach and Daisy call the brothers (with Daisy specifically calling Luigi and Peach calling Mario) so their golf game can start. The four characters are all shown hitting their golf balls and supporting their friends after they hit their golf ball. Later in the movie, Daisy, Mario, Luigi, and Peach move to another part of the golf course. The quartet gets a perfect view of a building that they are shocked to see explode (unbeknownst to them, due to a Bob-omb Bowser dropped on Wario and Waluigi). 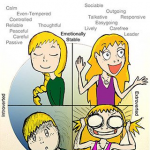