Bayonetta is a hack-and-slash action game series developed by PlatinumGames. The first installment of the series came out in 2009 and was followed by a sequel in 2014. The series follows titular Bayonetta, a vivacious witch with shapeshifting abilities, magical guns and various dark magic abilities. The first game was initially released on the Xbox 360 and Playstation 3, it was announced during E3 2014 that not only would a second installment of the Bayonetta series be released to the Wii U, but the original game would be ported to the Wii U.

The ported game featured various Nintendo-themed outfits and changes to mechanics, which were also included in Bayonetta 2.  These costumes. There are four outfits featured in the ported Bayonetta based on Nintendo characters and an outfit themed around Fox McCloud of the Star Fox series in the second game. Of the five outfits, Princess Daisy is referenced in one of Bayonetta’s outfits, named Sarasaland Princess. 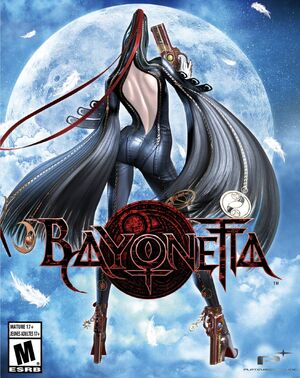 Bayonetta was developed by Hideki Kamiya, creator of the Devil May Cry franchise. The series follows eponymous Bayonetta (given a cocky British voice by Hellena Taylor in the English version) in action-packed and over-the-top adventures. Bayonetta was designed to be a modern adaptation of the witch archetype. She has a beehive-like hairstyle resembling the pointy witch hat of old. The character is tall with lengthy limbs and was given glasses to add “a sense of mystery and intelligence.”[1] Another major part of Bayonetta’s design is her feminine and skin-tight attire. Bayonetta’s personality perfectly matches her design. Lively and flirtatious, Bayonetta handles most situations with a playful blasé attitude. An Umbra Witch, Bayonetta’s fighting style consists of the use of four pistols as well as various magical abilities. These abilities include slowing down time, shapeshifting into animals, and summoning demons. Her own hair is used for some of these techniques, which by default literally composes her clothing.

In the first game, Bayonetta is initially unaware of the origins of both herself and her powers. Beginning in the fictional European city of Vigrid, Bayonetta becomes convinced that a mysterious gemstone in her possession called the "Eyes of the World'' must be reunited with its pair to retrieve her memories. Throughout the game, she battles a variety of menacing angels from one of three alternative planes of reality separate from mankind's own.

The first game was released on the PlayStation 3, Xbox 360, Wii U, Windows, Nintendo Switch, PlayStation 4, Xbox One. The second was released on the Wii U and Nintendo Switch. Both Bayonetta games are rated M for Mature (17+) due to partial nudity, blood and gore, nudity, strong language, etc.  This made Nintendo’s financial support of the sequel to Bayonetta a surprise, due to Nintendo’s kid-friendly brand. Despite this, they had no issues with the Bayonetta series and were mostly quiet observers during the development process of the sequel[2]. Bayonetta 2 was revealed during a Nintendo Direct on September 13, 2012. It was also announced that Nintendo would be porting Bayonetta to the Wii U.

"From the wardrobe of the princess of Sarasaland with a few slight altercations. Grants the user the ability to summon a certain spiky-shelled king through a wicked weave"

Bayonetta’s Sarasaland Princess costume consists of a yellow corset and tutu with orange designs resembling Daisy's panniers. She wears socks that reach the upper part of her legs with orange bows attached and a small image of a Pirhana Plant. Her sleeves are white and have various gold items from the Mario series. A gold crown sits on her head and she wears red heels. Just like the Sarasaland Princess, this outfit is comparable to Bayonetta’s costume based on the Mushroom Kingdom’s monarch, named Mushroom Kingdom Princess. The primary difference is the color scheme, but there are a few small changes to make them both have some uniqueness. The biggest of these changes is a Luigi figure on Bayonetta’s right hip when wearing Sarasaland Princess and a Mario figure being on Bayonetta’s right hip in her Mushroom Kingdom Princess dress.

When wearing either Mushroom Kingdom Princess or Sarasaland Princess, enemies will drop Gold Coins instead of Halos, making the signature Coin collection noise once picked up. Any of Bayonetta’s attacks that would normally summon Madame Butterfly’s limbs are replaced with Bowser’s feet and fists, appropriately aided by Bowser’s growling sounds.

Sarasaland Princess has the same design and aesthetical difference in Bayonetta 2, the only change is that the costume can be worn with either of Bayonetta’s hairstyles; her short bob cut from the second game and her beehive-hairstyle with long hair and ribbons from the first.

Concept art of Sarasaland Princess and her Luigi plush.

Bayonetta's Sarasaland Princess in the game.